Which Robot is Right for My Application? - Video Showcase

More manufacturers, big and small, are choosing robotics over hard automation in certain dangerous, dirty and dull applications to help make the process more safe for the workforce or just more efficient.  But which type of robot makes the most sense?

When first tackling a robotic application, one of the first questions you’ll have to figure out, is what type of robot you will need.

Articulated arms are perhaps one of the most widely used types of robots.  They are capable of the largest reaches- well over 7 and 8 feet. They have the largest payloads, able to lift in some cases, thousands of pounds, and they have the most joints which make them literally the most flexible-often able to hit any point at any angle within their reach. 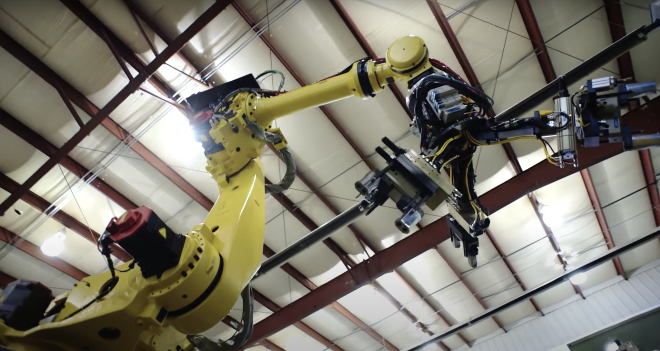 However, with reach, payload, and more motors on joints, comes more weight.  This makes them often more difficult to hang overhead and they often need more base structure.  All this extra hardware also adds to more cost. Lastly, of all the main robot types, these are often the slowest of the lot. One of the most common places to find articulated arms is palletizing and depalletizing applications since they have such a large reach in the up and down direction, and can handle large payloads, but because of their flexibility, they can end up nearly anywhere in the plant where high speeds aren’t necessary.

For industrial robots, Deltas are the new kids on the block and have really introduced robots into many more processes specifically in the food and bev space since their design makes them more capable of isolating their motors from water and they handle some of the toughest washdown environments on the planet. They are the fastest robot in the industrial space, with many models doing well over 200 picks and places in a minute with some getting closer to 300.  Lastly, with overhead mounting, Deltas rarely take up much plant floor space.

The downsides for deltas are they are not as flexible, and they often don’t have a very large reach in the up and down direction.  However, they are highly optimized for picking and placing so they rarely need the large up and down, and with the inception of adding rotation as well as a pitch and yaw axes into deltas in recent years, they can handle much trickier package loading including slanted or vertical placement from products laying down. Something to note though, whether for better or for worse, Deltas almost always need to be place with an overhead structure.

Scaras used to be the go-to for fast pick and place applications, but since deltas have become more mainstream, they have an interesting fit into this lineup.  When the extreme speed or the wash-down-ability of Deltas aren’t needed, Scaras are a lower cost, and more accurate option.  They also can be floor or wall mounted much like articulated arms, but without the need for as much structure since they are usually lighter weight. 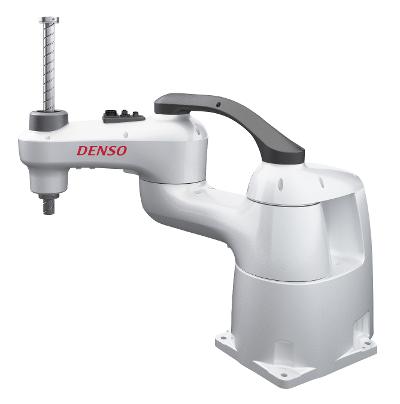 While deltas in the market are drastically increasing payload, reach, and adding axes, Scaras have the lowest rated payloads (though there are a couple heavier payloads, most are only a few pounds), the shortest reaches, and stick typically with just an XYZ with optional rotation. You can get a very fast, very accurate robot for pretty cheap if you can handle the programming.

Collaborative robots are the newest type of robot on the market and they can technically be any style of the previous 3 robots mentioned, but most typically are articulated arms.  To be able to collaborate with humans, the robots monitor the torque of each axis so if they encounter a person or unexpected object in their space while they are moving, they will stop with the goal of not harming a person.  While if they are wielding something sharp like a knife or a saw, they will never be safe moving freely around people, these often don’t need advanced safety guarding. Because of the ease of implementation on the safety side, many collaborative robot companies have made the software for these as easy to use as possible so end customers without any experience with robotics or programming can easily teach these robots. As manufacturers using these robots realized that these are often simple enough to teach that they can handle low volume production, many manufacturers and customers have added rolling stands to their robots so they can wheel the robots over to machines to assist in whatever area of production needs assistance.  Machine shops and end users with light payload palletizing were some of the biggest users of this technology, and one of the drawbacks of many 6 axes robots is they need a direct line of site to hit the certain angles, so many end users, supplement their robot with a vertical lift, or horizontal slide axis for the robot to reach high pallets and get out of the way of humans, and some of the newer Collaborative manufacturers have added a 7th axis to their robot to be able to reach around doors so humans can still have access to CNC and lathes while the robot is manning them, and to be able to reach over high stacks of boxes without the need of a vertical lift. 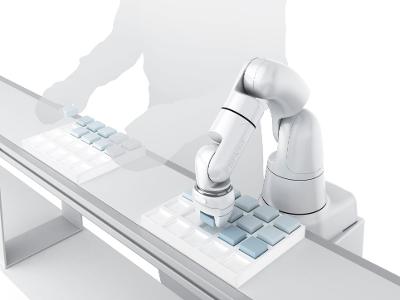 The downsides of working next to humans is that collaborative robots often can only carry very light payloads and they have to move slow as the energy imparted into the object the run into increases linearly with the mass of the robot and payload, and with the square of their velocity. So according to their ISO standard, they are limited to 250mm/s on speed and 85W of output power, however, with something as simple as a safety scanner to assure everyone is a safe distance away from the robot, they can move well beyond collaborative speeds and get close to the speeds of their non-collaborative counterparts.

Because of the flexibility in teaching, safety, and movability of collaborative robots, these can be a good first step in trying out robotics in you non-washdown areas or for testing out grippers to see what best works with your different products.

Learn More via our Robotics Videos Below:

If you need any more help, reach out to one of our robotics expert by filling out the form below.